Book clubs! If you would like to inquire about scheduling a Skype or call-in discussion with me about THE ART OF FLOATING, email: kristin@kristinbairokeeffe.com.

The Art of Floating

When her beloved husband Jackson disappeared without a trace, popular novelist Sia Dane stopped writing, closed down her house, stuffed her heart into a cage, and started floating. It wasn’t the normal response to heartache, but Sia rarely did things the normal way.

Exactly one year, one month, and six days after Jackson’s disappearance, Sia discovers a mysterious man on the beach. He’s mute, unresponsive, and looks as if he has just walked out of the sea. It’s the sort of situation Jackson would have solved with a simple call to the police. But Jackson is gone.

As unreal as he seems, Sia is determined to help this man. Perhaps she can return him to his place in the world—to whoever lost him and loves him. Perhaps she can answer their questions the way no one could answer hers.

When Sia sets off on a mission to figure out where her husband disappeared to and where this man came from, she has to reckon with a mysterious homeless woman, an egomaniacal doctor who wants the man in a psych ward, a fervid gaggle of plover-lovers, the legacy of her name, and her own crippling heartache.

But as her friends and family help her winnow her way to the truth, Sia comes to realize that the unfathomable leap between sorrow and healing begins with a single step. 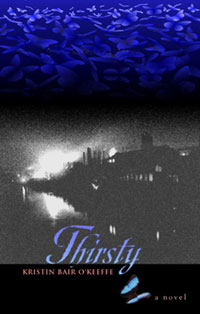 Kristin’s debut novel Thirsty was published by Swallow Press in 2009, and it got some nice buzz in the press. It was included in:

About Thirsty, Publisher’s Weekly said: “[Bair] O’Keeffe’s debut gracefully encapsulates the working-class cycle of poverty and hopelessness in the lives of these hard-laboring, sympathetic wives and mothers.”

Hardcover & electronic editions are available at:

It is 1883, and all of Klara Bozic’s girlish dreams have come crashing down as she arrives in Thirsty, a gritty steel town carved into the slopes above the Monongahela River just outside of Pittsburgh. She has made a heartbreaking discovery. Her new husband, Drago, is as abusive as the father she left behind in Croatia.

In Kristin Bair O’Keeffe’s debut novel, Klara’s life unfolds over forty years as she struggles to find her place in a new country where her survival depends on the friends who nurture her: gutsy, funny Katherine Zupanovic, who isn’t afraid of Drago’s fist; BenJo, the only black man in Thirsty to have his own shop; and strangely enough, Old Man Rupert, the town drunk.

Thirsty follows a chain of unlikely events that keep Klara’s spirit aloft: a flock of angelic butterflies descends on Thirsty; Klara gives birth to her first child in Old Man Rupert’s pumpkin patch; and BenJo gives her a talking bird. When Klara’s daughter marries a man even more brutal than Drago, Klara is forced to act. If she doesn’t finally break the cycle of violence in her family, her granddaughters will one day walk the same road, broken and bruised. As the threads that hold her family together fray and come undone, Klara must decide whether she has the courage to carve out a peaceful spot in the world for herself and her girls.

“Blending radiant language and a dreamlike journey through sorrow and healing, this is one to recommend to fans of Sarah Addison Allen and Eowyn Ivey.” ~Booklist

“…the core plot of THE ART OF FLOATING is touching and delivers quite an emotional punch.” ~RT Book Review

“A triumph. A treasure. Tender, profound, and hilariously heartbreaking. A gorgeously magical story that will have you saying ‘my favorite!’ and then sharing it with everyone you know.” ~Hank Phillippi Ryan, award-winning author of The Other Woman and The Wrong Girl

“With a touch as light as air, Bair O’Keeffe delivers a powerful punch. The Art of Floating is an emotional, sensitive novel about what causes pain and what defines loss, where “what really happened” floats somewhere between the realms of the real and the impossible. Sweet as a summer breeze, aching as a frozen sea, this story drifts through quirky wordplay, the small town drama of coastal New England, and the lure of detachment from one’s own mind, without losing its tether. One man is lost, one man is found—how on earth, or underwater, or in the air, did this come to be?” ~Lydia Netzer, bestselling author of Shine Shine Shine